My name is Rosie and the way I treat books is unethical. Or, at least, that’s what people seem to think.

Just the other day, I was getting a little homework done in the university cafe. Because I care about trees and didn’t want to destroy polar bears’ homes, I’d decided to write my answers straight into

my HURRA!!! PO POLSKU textbook. My pen had barely touched the paper, however, when my friend, poring over a pristine copy of Hammer’s German Grammar and Usage, let out an audible gasp and asked me what on Earth I thought I was doing.

Sure, I had made a mistake in my first answer and crossed out Krzystof mieszka, but I was a beginner; mistakes were expected.

To my surprise, however, my friend didn’t take issue with my bad Polish, but rather with my callous and disgusting abuse of books. I have to admit I was nonplussed – after all, I’d bought the textbook, I didn’t plan on reselling it, and occasionally I liked to take out my pent up anger on it.

“In pen???” She kept repeating, incredulous.

This was only the second time she and I had fallen out (the first time had been concerning the comparative merit of learning German and Czech. We eventually concluded that we were both losers), so I took it pretty seriously. Was there something inherently wrong with the way I use my books?

People had said to me before that folding over pages was the work of the devil, but I’d always dismissed them as insane. Now, here was someone I respected, Germanic studies aside, calling me out. I needed to think things over.

Back at home, I collected the few books I keep in my term-time bedroom and examined them.

Yeah, the pages are folded, I thought, tossing aside a copy of Nosh for Students. Surely that’s not such a crime. Under my bed was a copy of ‘Oxford Lives: James Joyce” by Richard Ellman; the twelve hundred-page tome had been crushing a pair of summer shoes.

Shoes safely returned to the heap of clothes in the corner where they belonged, I heaved the heavy book onto my bed and began to look over its condition. I had to admit it wasn’t great.

I’d folded over one page two or three times. I’m sure I wouldn’t damage a book without good reason! I thought, and hastily reread the page, then the entire chapter. However, as interesting and engaging as Ellman’s biography is, I couldn’t see any real reason to revisit this particular section. Never mind, I thought. The bookmark industry is fundamentally corrupt.

Similarly, I’d messily highlighted parts of the text. This is an academic piece of work! I told myself. It takes time to understand it. I must have highlighted important bits. Yet once again I was disappointed: the only thing that seemed interesting about the highlighted sections was that they used words I’d had to look up
in the dictionary (e.g. myopic).

Almost despairing, I flicked to the

front of the book. In my own handwriting were the words, “What if bats could blog?”

Fair play, I thought to myself. I don’t regret that at all. After all – what if bats could blog?

I wasn’t finished investigating myself, though. I felt a great desire to prove that I wasn’t as bad as my friend thought. I even felt a little guilty; after all, books have been my constant companions since I learnt my ABCs – it would be heartbreaking to admit that I was treating

I grabbed the last book I’d read – ‘The Beast Within’, a fantastic novel about love, murder, and trains.

I didn’t even have to open this one: the spine was bent out of shape and covered in white veins where I, captivated by the locomotives and the passionate affairs, had bent the covers.

I slumped in my desk chair, miserable. It was true. I was a book abuser. I might as well stop buying books altogether and get a Kindle; maybe I’d treat that more kindly. Plus I could get a nice cover for it, and I’d heard that the savings were significant.

But what was I thinking?? Me, get a Kindle? Had I gone mad? What about the new book smell, the feel of the pages? This was out of the question.

By now I had stood up and was pacing, marvelling at how I could be so ungrateful to the things that had kept me company, shown me new worlds, and even taught me how to wonder. I had some serious thinking to do.

Just then I stubbed my toe on something hard, rectangular and bright green. It was my copy of ‘THANKS FOR ALL THE MONEY HOW TO USE MY LIFE STORY TO BECOME THE BEST JOEL MCHALE YOU CAN BE’ by Joel McHale. I was dispirited, but out of sheer habit I picked it up and flicked to the photos page (my favourite bit).

I was chuckling at the celebrity memoirs posters when something struck me: this book was in pretty d 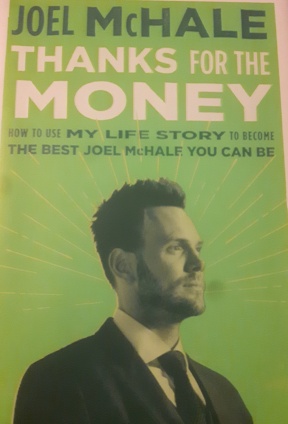 ecent shape. I mean, yeah, I had just kicked it across the room, but there were no folded over pages, no highlighted bits, and the spine (given I sprung for the hardback (you’re welcome, Mr McHale)) was intact. Even that smudge by Joel’s mouth in the picture doesn’t count – it’s because I broke my camera and then got dust on it. Shit, I’d go so far as to say I’d give it a “Used – Very Good” on Amazon.

I could hardly believe it – I wasn’t an irredeemable book destroyer! I could live in society again, as long as I only ever read this exact book in public.

Then something else struck me – I hated this book.

Well, not the book itself, it made me laugh out loud a few times and inaudibly chuckle a lot more.

What I hated was the copy of the book – it didn’t feel like mine. There was no telling that I’d read it all, except for the fact that I could remember bits of it and I’d put it on my book list Google doc (between all the books I had to read for my literature module and ‘Breakfast at Tiffany’s’.)

I looked at my shelf; the books there were weary, exhausted and battle-scarred – but so was I. Reading them had had as much as an effect on me as it had had on them – I’d lived through them, and it seemed right that they’d got scuffed in the process.

I’ve got no time for books that don’t grab me so much I rip them apart; cookery books without food stains are just decor.

I don’t care about the spines of books. I care about the words. I want the words to pull me apart and put me back together a different person – I don’t want to have the time or the patience to treat a book gently.

So I’m just going to come out and say it, reader: I abuse books.

This site uses Akismet to reduce spam. Learn how your comment data is processed.

How many people have been here before?

This has been a public service announcement.